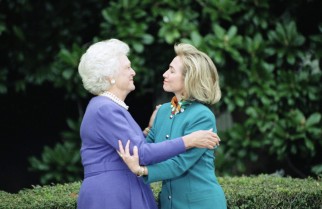 In attempts to try to lighten this mess of an election, Family Circle is bringing back the Presidential Cookie Poll. The concept is a simple one. Go onto the Family Circle website, make a batch of Melania Trump’s Star Cookies and a batch of the Clinton Family Chocolate Chip Cookies. Taste and then cast your vote on the ones you like the best.

With each election, each candidate’s spouse enters a recipe and Family Circle claims to be able to accurately call the winner of the election each time.

The start of the Presidential Cookie Poll was not an innocent one. Ironically, it was created because of Hillary Clinton.

When Bill Clinton first ran for president in 1992, Hillary was being interviewed about her own career in public service:

“You know, I suppose I could have stayed home and baked cookies and had teas, but what I decided to do was to fulfill my profession, which I entered before my husband was in public life. And I tried very, very hard to be as careful as possible, and that’s all that I can tell you.”

A lot of people during that time, especially homemakers, got enraged because of her comments. One New Jersey voter told TIME back then, “If I ever entertained the idea of voting for Bill Clinton, the smug bitchiness of his wife’s comment has nipped that notion in the bud.”

Regina Ragone, who is now the food director at Family Circle, said how the magazine is famous for recipes and cookies. Hillary Clinton’s comments can be used as the perfect opportunity to start a cookie contest. The cookie contest was also a way to soften and feminize Hillary’s image.

This year, the contest is a little different. Instead of the spouses submitting recipes, the Clinton’s submitted a “family” recipe. (Which is really just Hillary’s recipe from the original contest.) This does call to question would it be more of a statement of feminism, having Bill participate in the contest like all other spouses or to end the whole thing.

This strangely parallels the Parks and Recreation’s “Pie-Mary” episode. Leslie is working on her new job in D.C and Ben is trying politics once again. The Indiana Organization of Women are in an uproar since Leslie wasn’t planning on baking in the Pie-Mary. Leslie is a intelligent competent human and since she is a women, it rubs people the wrong way. They ultimately plan to protest Ben if Leslie participates in their pie baking contest. The solution to this problem is Ben competing instead. This causes a whole new set of problems. The “Male Men” show up to protest the feminization of Ben since he isn’t “acting like a man” by baking.

It is a lose-lose situation for Ben and Leslie. Does that mean the same for Bill and Hillary? Five out of the six past winners have moved on to the White House. We just need to wait and see.